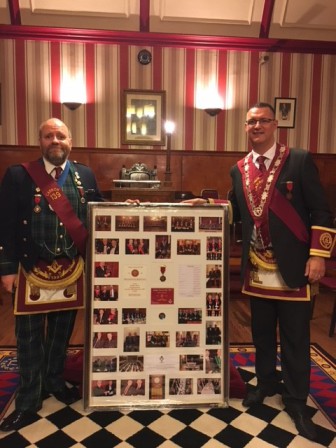 Brother Charlie MacVicar presented at a recent meeting of the Lodge a photo potrait of the Lodge Carron 139 Brethren at their 250th Anniversary celebration held at the Dobbie Hall Larbert on 30th September 2017 RWM Tam Meikle is seen here receiving the gift on behalf of the Brethren of the Lodge and intimated that it would be placed in a suitable area of the Lodge with great pride. 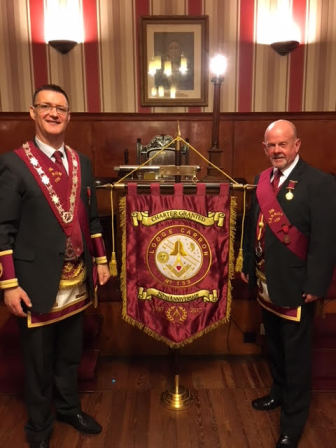 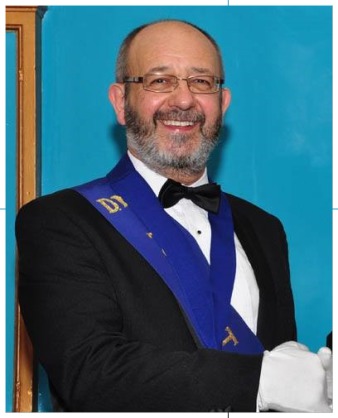 RWM Tam Meikle and ALL the Brethren of Lodge Carron 139 would like to take the opportunity to thank Brother Bill Mcleod Lodge Polmont 793 for the excellent photograghs taken on the 250th anniversary celebration at the Dobbie Hall on Saturday 30th September 2017 !! YOU HAVE MARKED WELL BROTHER BILL !! 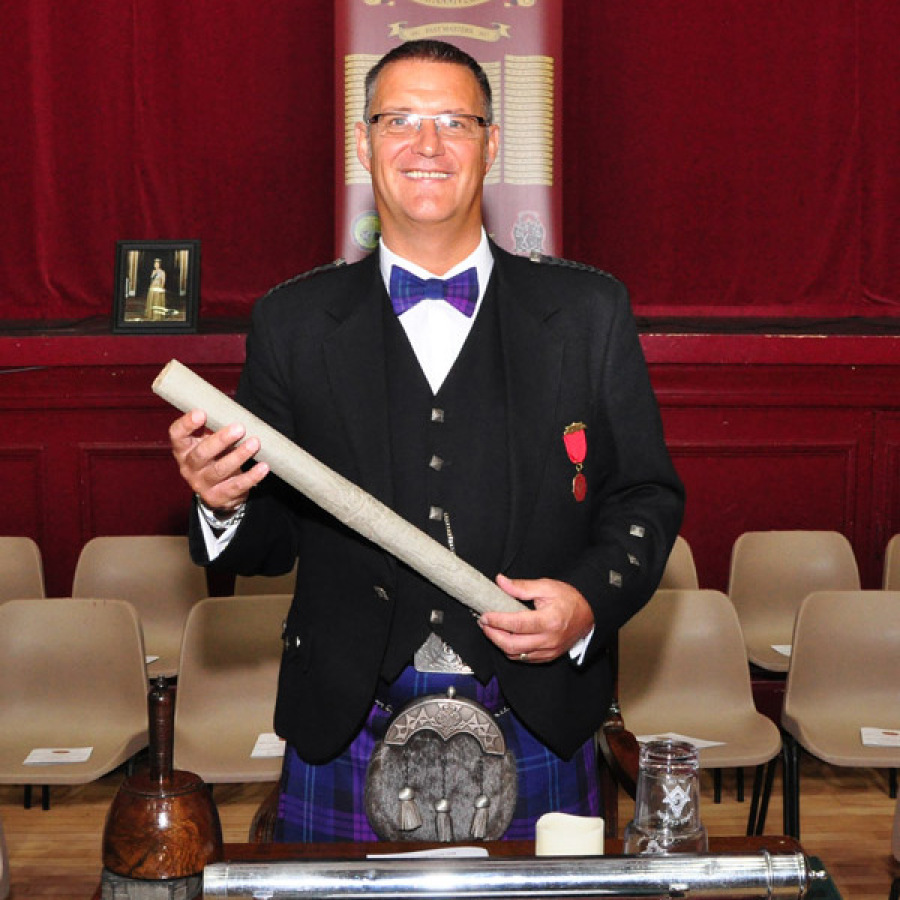 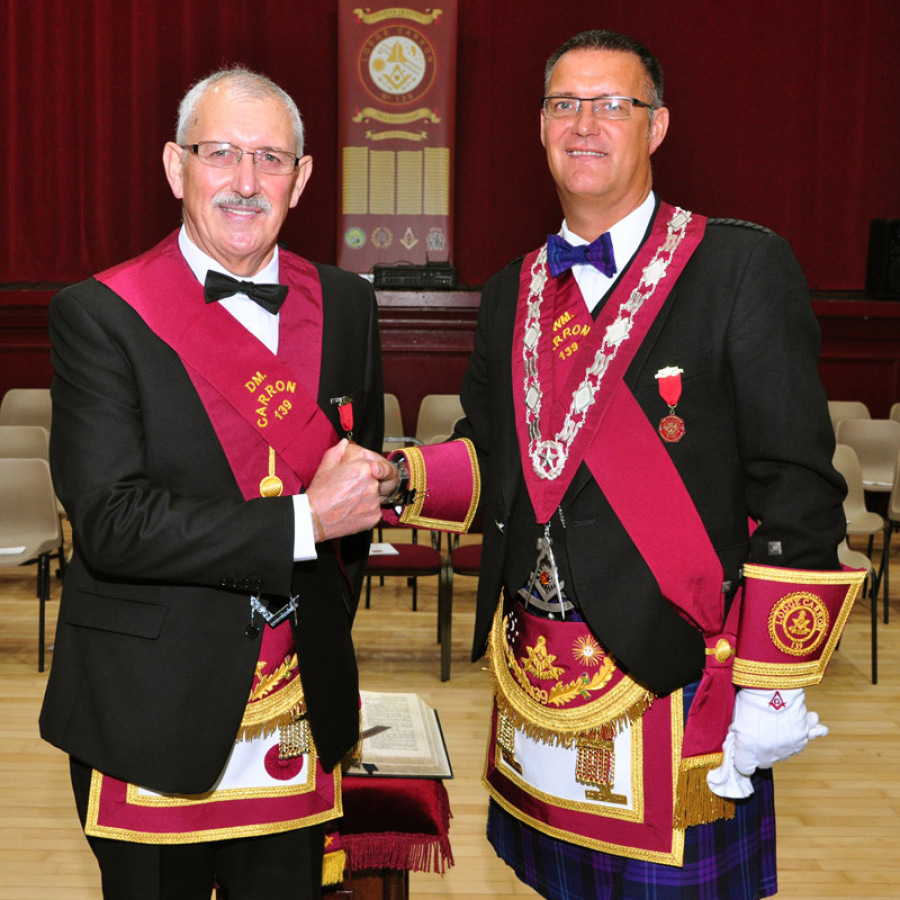 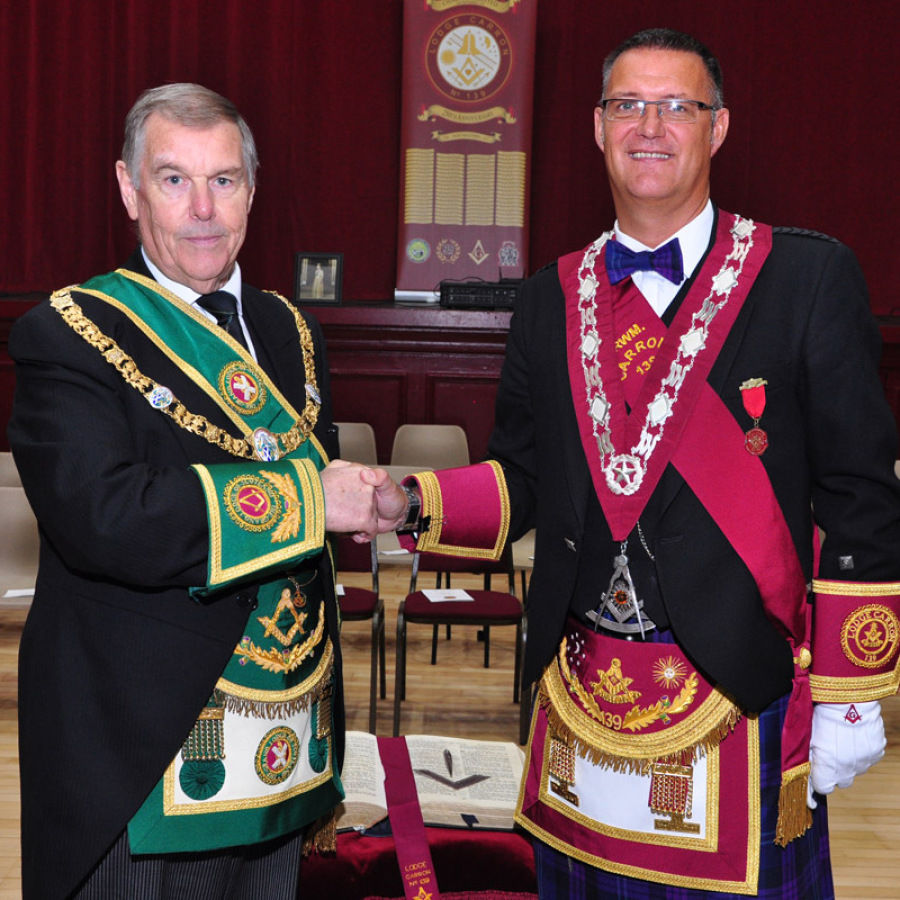 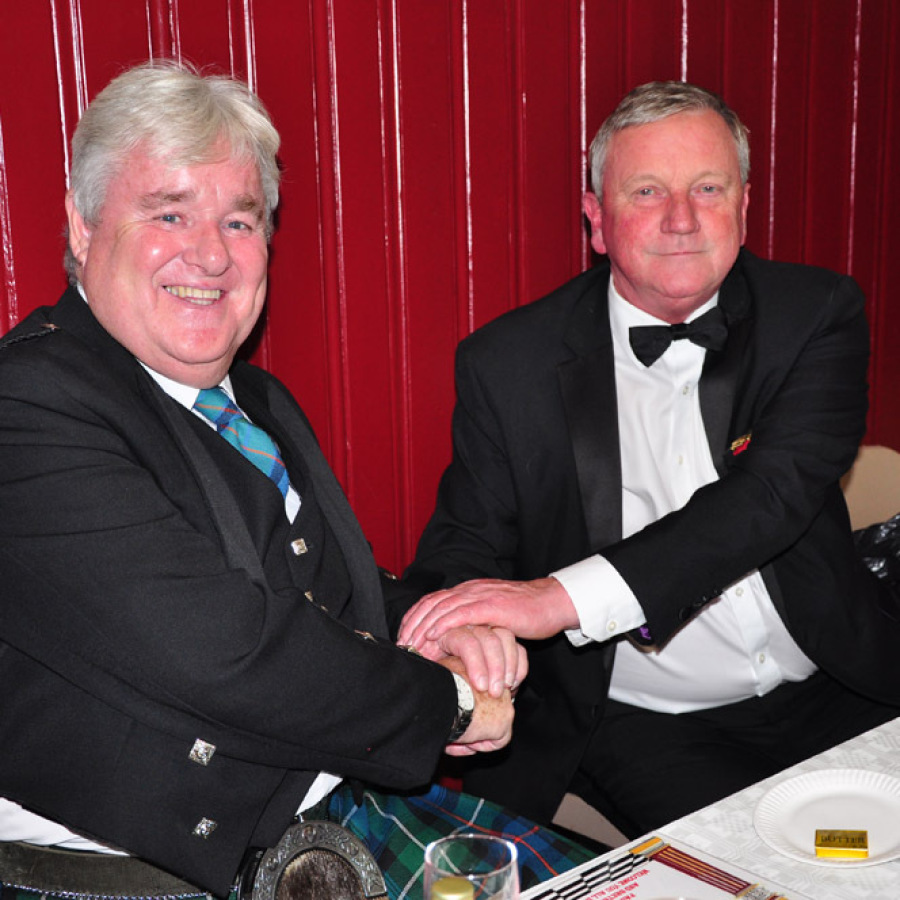 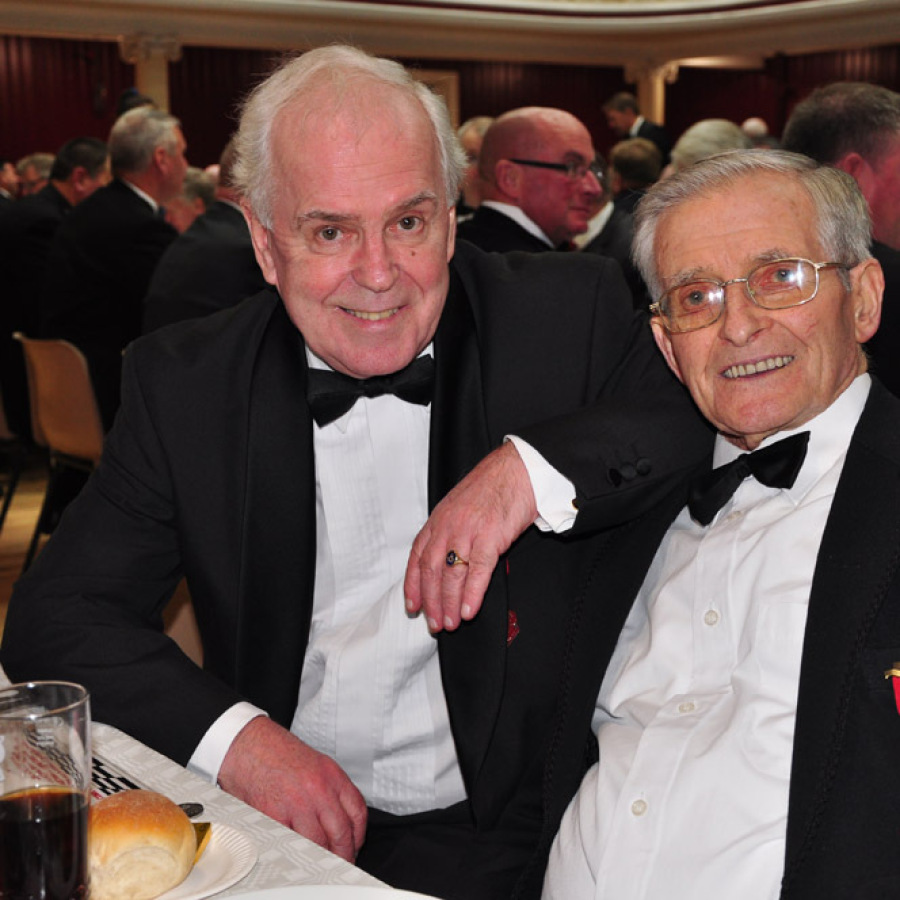 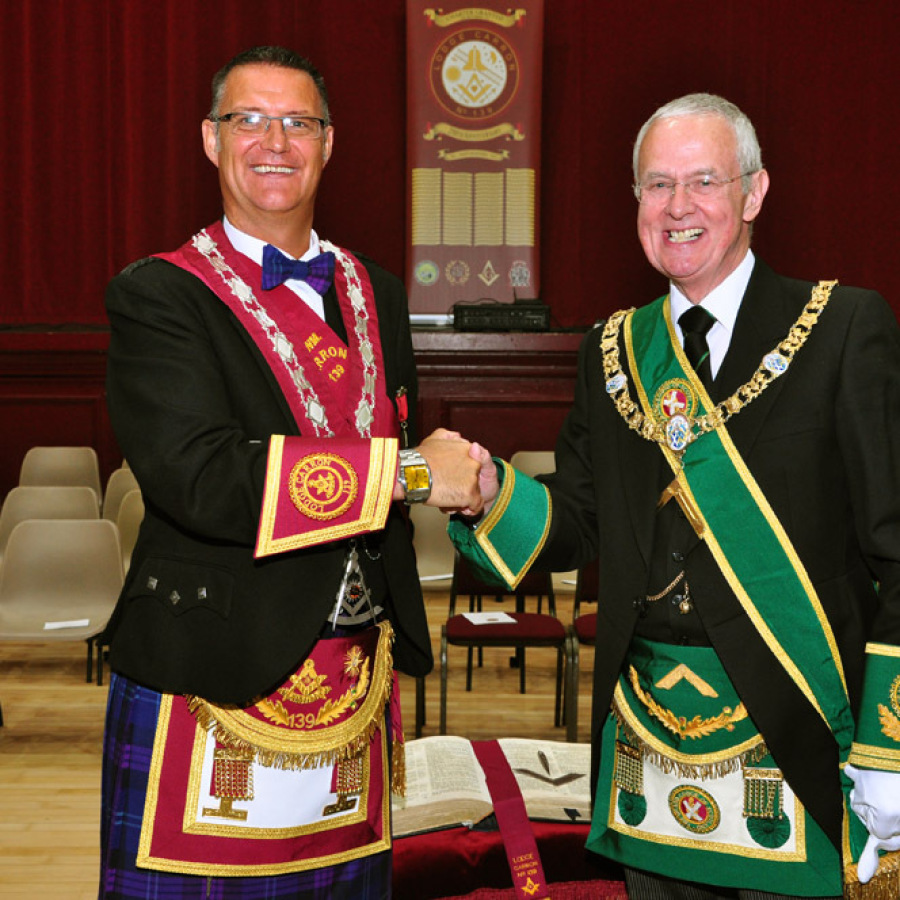 Bottom Picture:1-Ian Barron PM 139 proposing the toast to the (PGL of Stirlingshire)

Bottom Picture:3-A selection of Brethren from the Anniversary Celebration 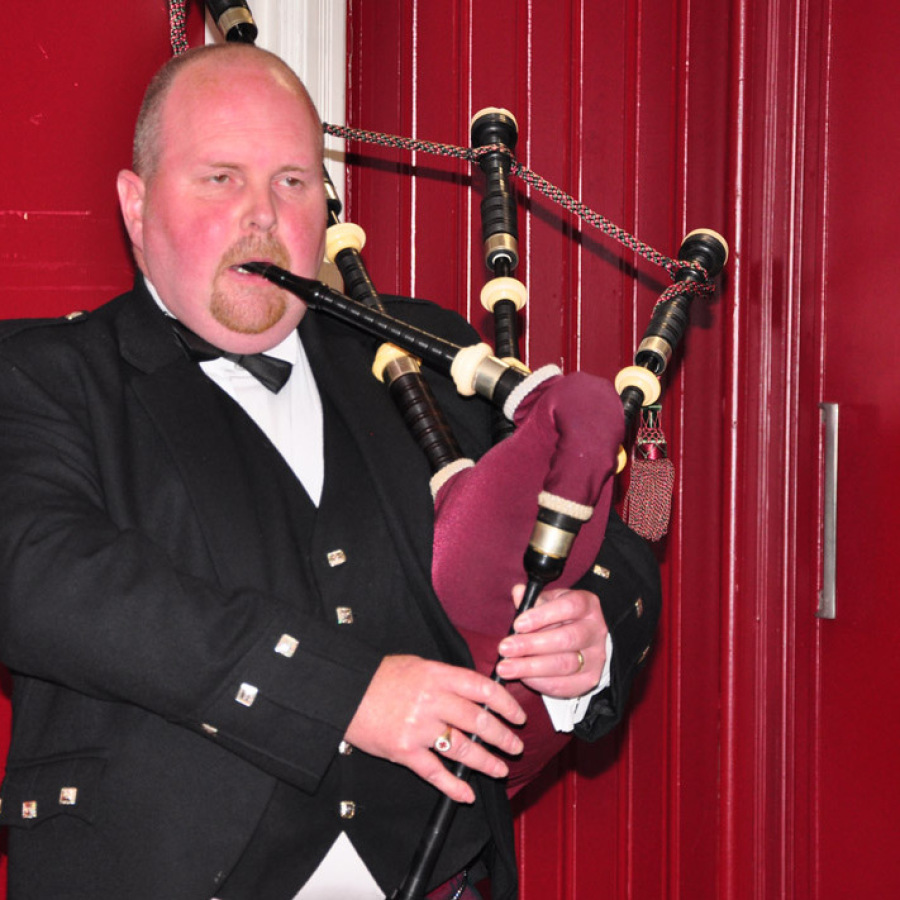 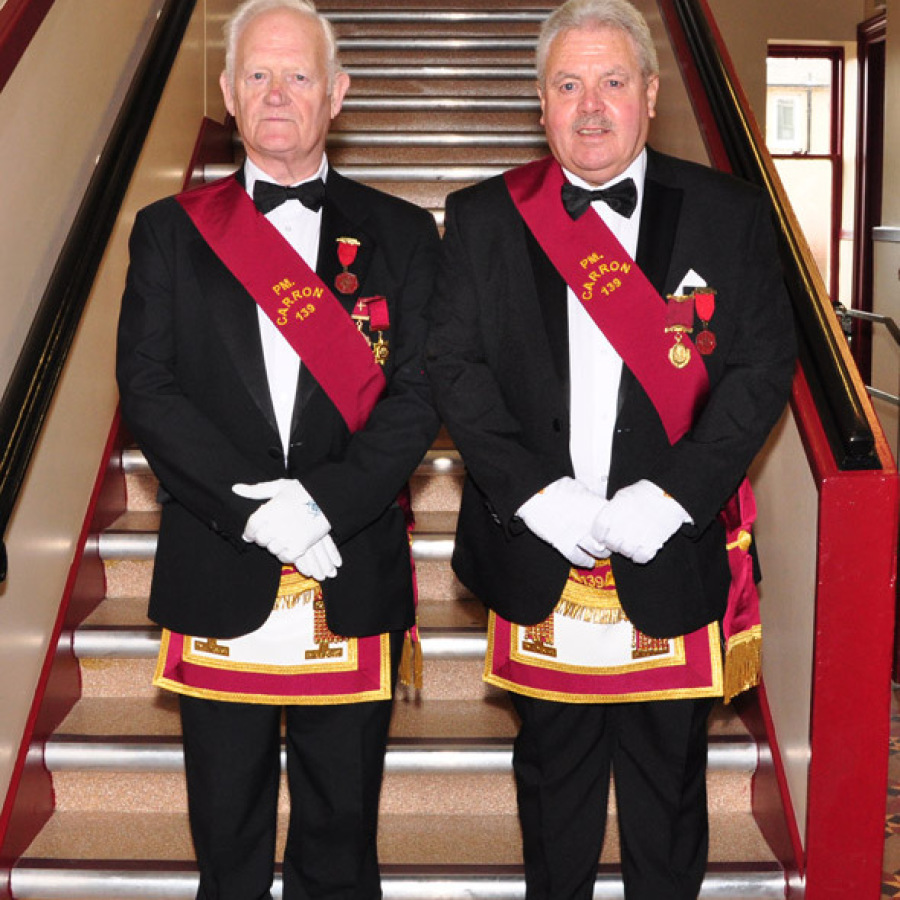 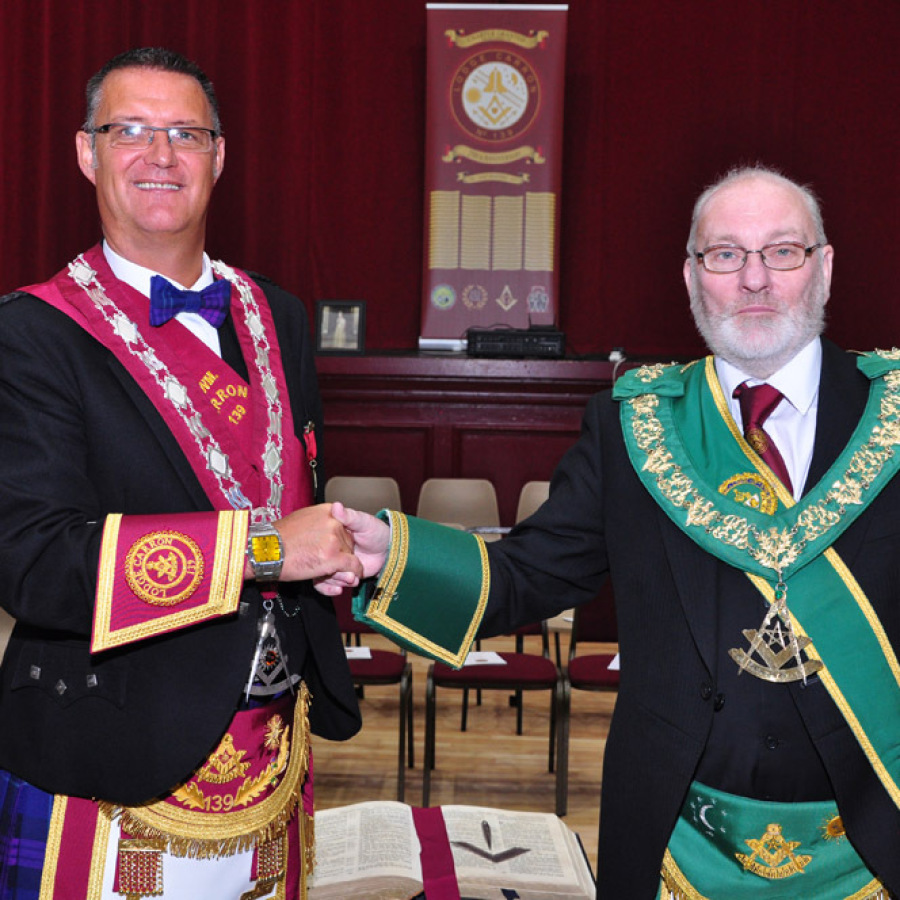 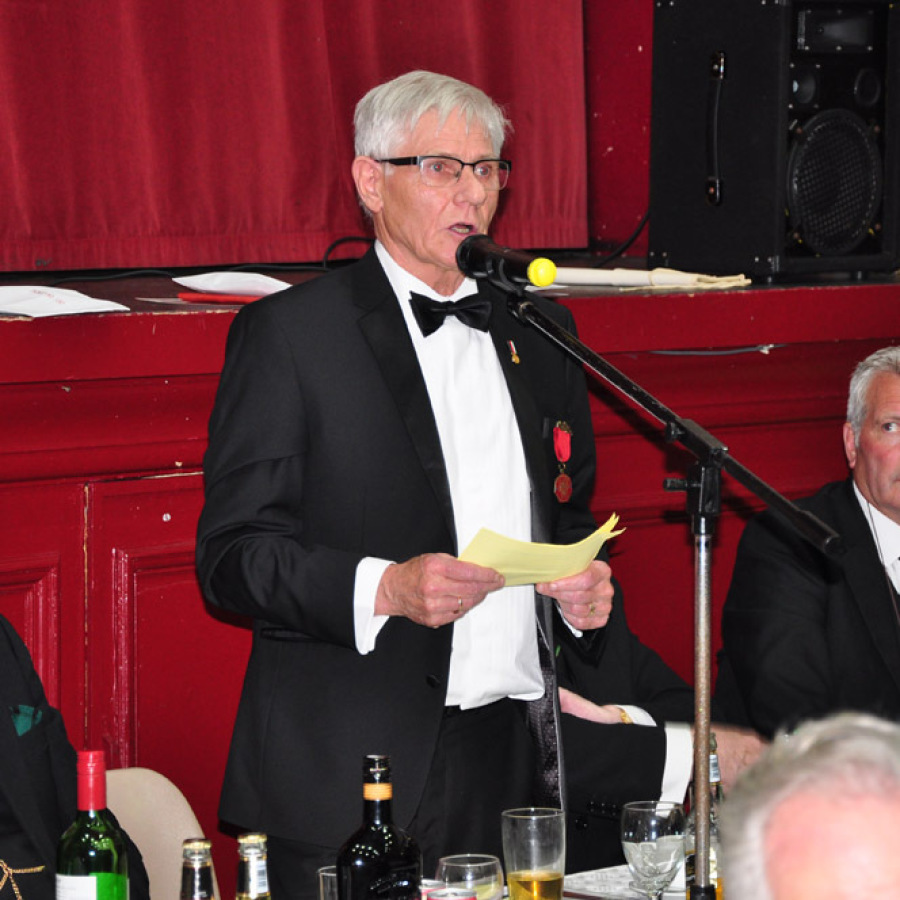 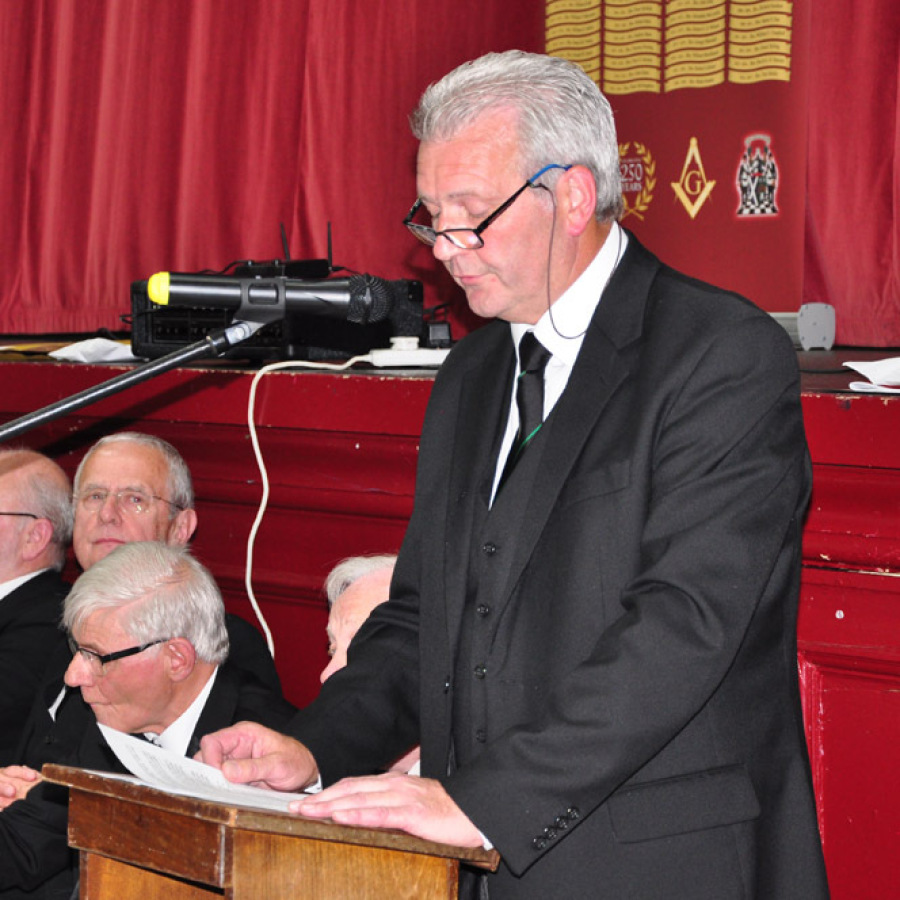 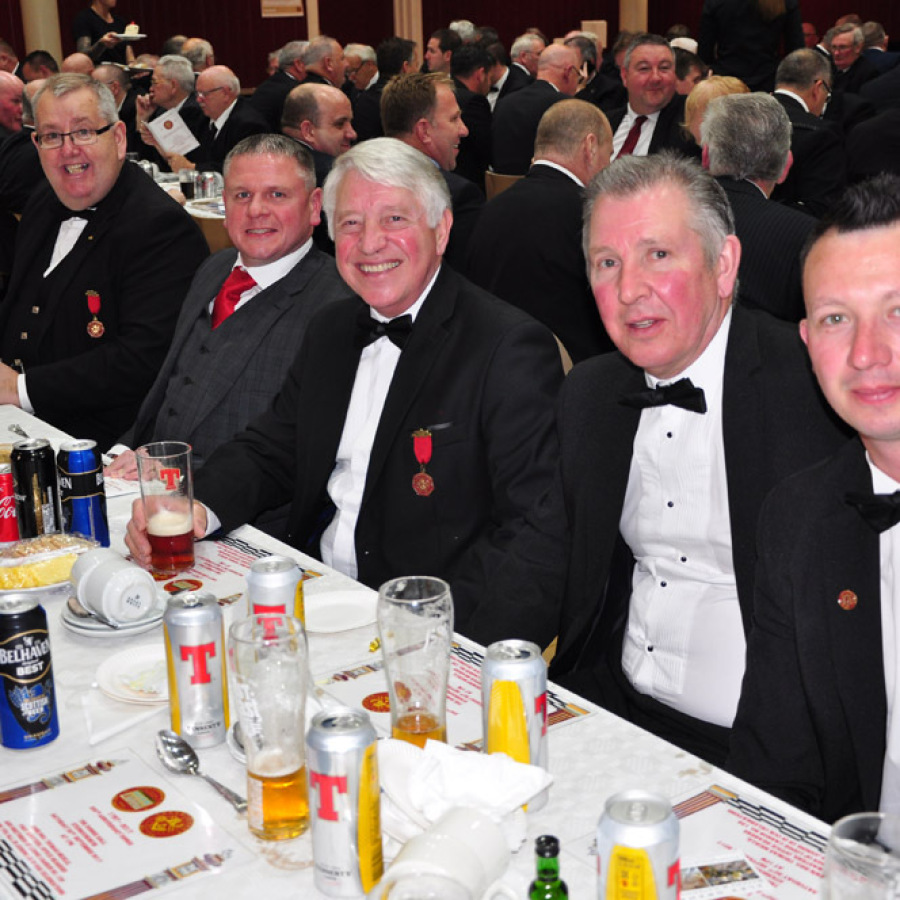 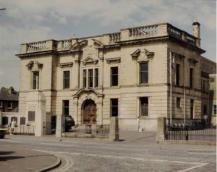 RWM Tam Meikle, PM's, Office-Bearers & Brethren would like to take the opportunity to thank the Dobbie Hall Trust for allowing the Lodge to hold the above celebration, also Alex Graham(Catering) Victoria Inn (Refreshments) and waitress service. The ceremony of re-dedication was carried out by the Grand Lodge of Scotland headed by the RWDGM Brother W. Ramsay McGhee in a most exemplary and dignified manner.

On Saturday 30th September 2017 Lodge Carron 139 celebrated 250 years of Freemasonry in a ceremony in the Dobbie Hall Stenhousemuir there was over 240 Brethren to witness the RWM Bro Tam Meikle who welcomed into the Lodge 16 RWMs from within the Province of Stirlingshire in attendance along with RWMs, PMs & Brethren from outwith the Province of Stirlingshire. He then welcomed into the Lodge a Deputation of 26 Office Bearers from the PGL of Stirlingshire headed by the RWPGM Bro. Alastair T Marshall RWM, Bro. Meikle then welcomed into the Lodge a Deputation of 23 Office Bearers from the GL of Scotland headed by the RWDGM Bro. William Ramsey McGhee who were there to carry out the rededication ceremony which was expertly carried out to a very high standard by the RWDGM William Ramsey McGhee and his Office Bearers, at the conclusion of the ceremony RWM Bro. Tam Meikle thanked RWDGM Bro. William Ramsey McGhee and his Office Bearers for carrying out an excellent rededication ceremony. After the close of meeting it was down to the Office Bearers and Brethren of Lodge Carron 139 to uplift the Lodge furniture and to set the tables and chairs for the meal and they did it in jig time. The food which was of excellent quality and was delivered to the tables very quickly by the caterers. At the conclusion of the meal it was time for the speeches & toasts the toastmaster was Bro. Charles Kilpatrick PM Lodge Carron 139 the RWM Bro. Tam Meikle gave the toast to the Queen and the Craft, Bro. Alan Reid PM Lodge Carron 139 gave a first class toast on the history of The Grand Lodge of Scotland going back to its inception in 1736 through to the present, RWDGM Bro. William Ramsey McGhee made a suitable reply he also stated that the GLOS through all the Brethren had raised in excess or £300,000 for Prostate Scotland plus donations to CHAS and various other charities He then asked the secretaries of the Lodges to send to the Grand Lodge any local donations made by the Lodges so that the Grand Lodge can produce a record of donations made by the Brethren and therefore get some recognition of the charitable donations by all Brethren There was a piper interlude by Bro. Gavin Richardson Lodge Carron 139 who played some inspiring tunes on the bagpipes. Bro. Ian Barron PM Lodge Carron 139 gave a brief history of the PGL of Stirlingshire which was very informative or the time of the Jacobite Rebellion RWPGM Bro. Alastair T Marshall made a suitable reply. Next was an Accordion Interlude by Bro. Derek McMorrow which was an excellent medley of popular tunes. Bro. Leonard McComb PM Lodge St John Slamannan 484 gave a very good insight to the history of Lodge Carron 139 from the date of the charter on the 26th December 1767 through the years giving a brief history of Past Masters to the present it was a very comprehensive description of our illustrious history which was very well received by the assembled Brethren. Bro. Jim MacCauley WJW Lodge Carron 139 thanked Bro. Leonard McComb for delivering an exceptional toast on the history of Lodge Carron 139. RWM Bro Tam Meikle gave a very big vote of thanks to the visiting Brethren for their attendance and hoped they had a most enjoyable day with the Brethren of Lodge Carron 139. The visitors who had travelled from all parts of Scotland to be here also wished them a safe journey home. The afternoon which was a great success was concluded by the singing of Auld Lang Syne & The National Anthem. After the hall was emptied the Office Bearers and visitors adjourned to Lodge Carron for some more refreshments and Harmony with some excellent singers. The Amigos would like to take this opportunity to thank our many friends who came from Inverness, Aberdeen, Dundee, Perth, Auchterarder, Thornhill, Bridge of Allan, Stirling, Alva, Tillicoultry, Tullibody, Alloa, Tulliallan, Fife & Kinross, Edinburgh, The Lothians, Grangemouth, Falkirk District, West Dumbarton, Glasgow, Clydebank, Ayrshire to make it a very special day for the Brethren of Lodge Carron 139 we would also like to thank the PMs, Office Bearers & Brethren for the hard work they put in over the past 2 years to make it a success on the day and all the Office Bearers & Brethren for getting the hall set out on Friday night & Saturday morning a big vote of thanks for everyone who made it a special day. Many thanks to Brother Lindsay JD for your excellent report.

A generation passed away
Wherein her light burned low;
One faithful heart alone a ray
Retained and kept aglow.

She wandered here,she wandered there,
Nor found a place of rest
Till in the bosom of the 'Muir
She built herself a nest.

Now she is strong as all may see,
Her pillars straight and fair,
And busy as a busy be
At work within the square.

For ever in her centre stood
The great and shining Light
That, through life's maze, in ill or good,
Directs man's steps aright.

A Light that radiates over all
Comes from King Soloman's chair;
In high regard with great and small,
It luminate's the square.

These several years it's beams have shone
And suffered no eclipse;
Long may it be ere it is gone,
The wish comes from all lips.

Wardens and brethren leal and true
Surround it's every side,
Resolved to blossom out anew,
And grow, whate'er betide.

Yet more, our east holds varied stars
That yiels a lambent light,
And when our sun th'meridian jars
They 'charm the gloom of night.

Another Light-- lest we forget,
The Goat with the daisy chain;
Of all within the Lodge a pet;
The neophyte's foe amain.

Our youngest 'prentice felt his hair
Rise up on end with fear,
When, in the dark, without the square,
The Goat attacked his rear.

But safe within the circle wide
He on his hunkers fell.
There Harmony and Love abide
In which all Masons dwell

Now, let each son resolve to pay
His dues, and so excel,
That those in darkness e'en may say
"This Carron Lodge "marks well"