Brother Jim was initiated into Lodge Camelon No.1456 on the 21st November 1963 at the age of 22. Brother Jim was first installed into Office in the Lodge on the 14th October 1965 as Marshal. He quickly rose through the Offices of the Lodge and was installed as Master of the Lodge on the 11th October 1979 and served as Right Worshipful Master from 1979 till 1981. After coming out of the Chair Brother Jim didn't relax, he was always at the forefront and served as Secretary for a year. When the Lodge hit difficulties with Office Bearers due to various reasons Brother Jim agreed to take up the position of Master again and served as Right Worshipful Master of the Lodge for the second time from 1991 till 1993. Brother Jim took up his final Office in the Lodge in 2019 as Lodge Almoner and served as the Almoner until his passing. On the 24th January 2014 Brother Mackie was presented with a Diploma in recognition of having been a member of the Craft for 50 years. On the same evening RWPGM Brother Andrew McKinnon presented Jim with his Diploma and Jewel as Honorary Grand Jeweller which the Grand Master Mason had honoured him with the previous November. On the 28th September 2017 RWM Brother Tony Gault presented Brother Jim with Distinguished Service Diploma in recognition of his services not only to his Mother Lodge but also to Freemasonry in General. Brother James Mackie was a Member of many other Masonic and non-masonic orders but he always held Lodge Camelon in his thoughts and worked tirelessly for Lodge Camelon.

Past Master Mackie was the only Brother of the Lodge to hold the position of Right Worshipful Master twice and was a great encouragement to many and mentor to two or three of the Masters who followed him. Brother Jim was also elected to the office of Provincal Grand Inner Guard of Stirlingshire in 2020. He will be missed not only by his family but by the Brethren of Lodge Camelon and everyone in the Masonic Fraternity who had the pleasure to meet with him. Our deepest sympathy and condolences go out to Jims family at this sad time. “Well done thy good and Faithful Servant enter thou into the joy of thy Lord” 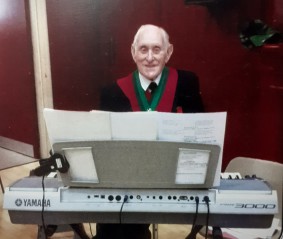 It is with a heavy heart and deep sadness that we announce the passing to the Grand Lodge above Brother James McKay Cassidy, HGAT, HM 139. 'Jim' had been fighting ill health on and off for a number of years, however, like PM Bobby Hunt before him, he refused to lie down to it and instead fought on with a courage that can only be admired. Once again, a testament to a generation of men and women who were certainly made of stronger stuff. Jim passed away peacefully at home with his family by his side. Much will be said about Jim and his dedication not only to his Mother Lodge, but to Freemasonry in Glasgow and beyond. He was a committed freemason, a stalwart in our Lodge, and a constant for over 57 years. Jim was proposed into the Lodge by his father, the late George Cassidy P.M, and was initiated on the evening of 4th September 1963. He was passed on the 20th of the same month, and raised on the 30th October of that year. He was later advanced to the rank of Mark Master Mason on the 16th September 1964, and gathered with the rest of the Brethren in 1965 when we celebrated 150 years of freemasonry at 275. Jim would go on to become Right Worshipful Master in 1973, installed into the chair of his Mother Lodge by his father and proposer, George Cassidy P.M. Jim would later go on to install his own brother, the late Robert Cassidy P.M, in 1978. In fact, Jim would go on to become our most experienced Installing Master, carrying out the duties on no less than 28 ccasions. Jim would also serve the Lodge as Treasurer for 30 years. For his sterling efforts to the Lodge for such an extended period of time, he was recognised by the Grand Lodge of Scotland, and awarded the distinction of Honourary Assistant Grand Treasurer. But yet more recognition was not far away. Jim only vacated the office of Treasurer when in 2017, during the nominations and elections, the Brethren of the lodge maintained the lodge protocol of choosing from their number, a most experienced Brother to take on the roll of Right Worshipful Master for our Bicentennial celebrations. On the evening of Friday 2nd November 2018, 200 years to the day of the lodge consecration, Jim represented the Lodge as RWM at the civic reception hosted by Glasgow City Council within the beautiful surroundings of our City Chambers. A wonderful evening was had by all, but it was merely the appetiser for the main event the following day, when the Lodge welcomed deputations from the Grand Lodge of Scotland, and the Provincial Grand Lodge of Glasgow, who were present to re-consecrate the Lodge and to present the RWM with his regalia. There was not a prouder man there present on that day than Jim, a culmination, at that time, of 55 years devoted service to his Mother Lodge. And he didn't let us down. Outside of the Lodge, Jim was also a member of the Provincial Grand Lodge of Glasgow, and served with distinction behind the scenes, checking the books and workings of the 77 lodges in the Province. Jim's extensive masonic knowledge could not have been put to any better use. Jim was also celebrated by the Brethren of Lodge Carron 139, when they marked his considerable support of their lodge by awarding him Honourary Membership. Today, Lodge Carron join the many lodges who mourn the passing of a good man and mason. Jim Cassidy set the standards within our lodge that we will always look to follow, but he himself was set that same standard by the many distinguished brethren who went before him. We as a Lodge will always look to maintain the high level of dedication, decorum, and attention to detail and excellence that Jim, Bobby Hunt, and the many, many bright names from our past demonstrated during their time with us. And for that, he, and they, will always be remembered.