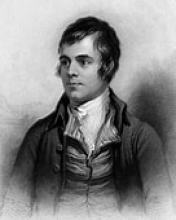 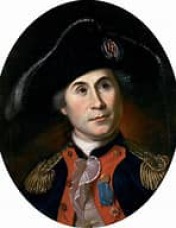 John Paul Jones, born 1747-died 1792 Founder of the American Navy. The most notable name on the Roll of St Bernard's Kilwinning Lodge, No 122 (erased in 1816), is that of "Captain John Paul" of the John of Kirkcudbright, who was admitted an Entered Apprentice on the 27th November 1770, and to ensure that future readers might have no doubt as to the identity of this intrant a note at the end of the minute says: "Paul Johnes entered". The famous rover was passed to the Fellow Craft Degree on 28th February 1771, but there is no record of his being raised as a Master Mason. His name is recorded in the books of the Grand Lodge of Scotland, and a Diploma by the Lodge was issued in his favour. He was born July 6, 1747 at Arbigland, parish of Kirkbean, in the Stewarty of Kirkcudbright, Scotland. He was the fifth of seven children born to John Paul and Jean McDuff. He went to sea at age 12, and was made Captain of his first merchant ship when he was 21, after the Captain died at sea of a fever. When he came to America to live, he probably arrived by way of Edenton, North Carolina, then moved up into the Fredricksburg-Alexandria area of Virginia. Some time during this period he added "Jones" to his name, which has caused much consternation and speculation among historians. But that, as they say, is another story. It would be churlish plagiarism to try to better the efforts of the "John Paul Jones Birthplace Museum Trust" at Arbigland! Their WebSite, dedicated to the great man, is well worth a visit. For a more distinctly Masonic view, the pages of Lodge St Cuthbert Kilwinning, No 41 in Kirkcudbright, (on the WebSite of The Provincial Grand Lodge of Galloway ) contain scans of the original Minutes of John Paul's initiation and 'raising' (sic) to the 2°, and some commentary from Brethren in the United States of America where he rests in the Chapel at the United States Naval Academy at Annapolis, Maryland. He is encased in a marble sarcophagus designed by Sylvian Salieres and modelled somewhat like Napoleon's tomb in the Invalides. Every Cadet, Officer, and visitor feels humbled there. 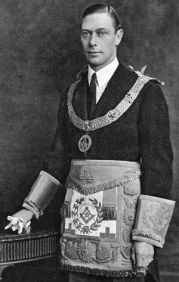 King George VI born 1895-died 1952 Past Grand Master Mason of the house of Windsor (formerly Saxe-Coburg-Gotha). He studied in Trinity College at Cambridge and served in WWI. He was created Duke of York in 1920. A son of George V, he reigned from the time his brother, Edward VIII, abdicated in 1936, until his death in 1952. He was initiated in Naval Lodge No. 2612 in December 1919, the ceremony being conducted by Lord Ampthill. In 1922 he was appointed Senior Grand Warden of the Grand Lodge of England, and in 1924 was made Provincial Grand Master for Middlesex. He was invested and installed by his great uncle, H.R.H. the Duke of Connaught. He held the latter position until he ascended the throne in 1938. As king, he accepted the rank of Past Grand Master of the United Grand Lodge of England, and was ceremonially installed at the Albert Hall in London before an audience of Masons from all parts of the world. In 1935 he accepted and was installed Grand Master Mason of Scotland, and affiliated with the Lodge of Glamis, No. 99, Scotland, where his father-in-law, the Earl of Strathmore, was a Past Master. He created the precedent of the English Sovereign's active participation in Masonic ceremonies, and personally conducted the installation of three Grand Masters (of the United Grand Lodge of England) - the Duke of Kent at Olympia in 1939, the Earl of Harewood in Freemason's Hall in 1943 and the Duke of Devonshire in Albert Hall in 1948. Only his last illness prevented his installing the Earl of Scarbrough in 1951. Toward the end of his reign, he stated that he had always regarded Masonry as one of the strongest influences of his life. He was a Royal Arch Mason and was a First Principal. He was a Past Grand Master of the Mark Lodge and former Ruler of the Mark Province of Middlesex (1931-37). He held the rank of Past Grand Master, and of Knight Commander of the Temple, was a 33rd Degree, and Grand Inspector General in the Ancient and Accepted Rite of Rose Croix. Said he of Masonry: "The world today does require spiritual and moral regeneration. I have no doubt, after many years as a member of our Order, that Freemasonry can play a most important part in this vital need" 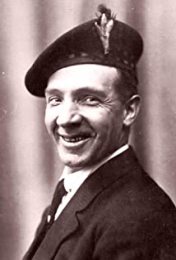 Sir Harry Lauder born 1870-died 1950 Entertainer born in Portobello, near Edinburgh, the son of a potter, with the surname MacLennan. As a boy he worked 12 hour shifts in a flax mill in Arbroath and as a teenager worked as a pitboy in Hamilton. Early success in Scotland and then England led to his first tour of the United States of America. 21 tours followed eventually earning $5000 a week and playing golf with presidents. His affection for his wife, Nancy, gave rise to two of his most successful songs; "Roamin' in the Gloaming" and "I Love a Lassie". His son, John, was killed in action during World War I which inspired him to write the song, "Keep Right on to the End of the Road". H. V. Morton, the writer, met him in Aberdeen during 1928 and described him as "small, sturdy and smooth of face. He wore hexagonal glasses and smoked a six-inch briar pipe. His Glengarry was worn at a jaunty angle and, as he walked, the almost ankle-length Inverness cape which he wore exposed a bit of a MacLeod kilt. The superior person will perhaps sniff if I suggest that no man since Sir Walter Scott has warmed the world's heart to Scotland more surely that Sir Harry Lauder. His genius is a thing apart." His reputation has suffered from those who criticise him for creating the stereotype of a kilted ultra-thrifty Scot. The greatest tribute to him must be that his songs are sung every day somewhere in the world. The last word should be his; 'Aye, I'm tellin' ye... happiness is one of the few things in this world that doubles every time you share it with someone else'. Sir Harry Lauder was initiated a Freemason on 28th January 1897 in Lodge Dramatic, No. 571, (Glasgow, Scotland) and remained an active Freemason for the rest of his life.
*********************************************************************************************** 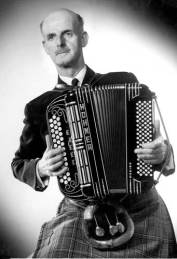 Sir James "Jimmy" Shand was a Scottish musician was born on January 28th, 1908 in East Wemyss in Fife, Scotland. Later his family moved to Auchtermuchty which currently has a bronze statue of Shand. At a young age Shand started by playing the mouth organ and later moved to the fiddle. At the age of fourteen he was forced to leave school and begin working in the coal mines. When he was 18, in 1926, he was banned from returning to the mines when he played a series of charity concerts for the then striking miners. Things started to change for Shand one day when he and a friend stopped outside a music shop in Dundee. His friend encouraged him to try the accordion which was displayed in the window. He started playing and the owner of store immediately offered him a job as a traveling salesman and debt collector. This gained him access to a van so that he could travel around to play gigs. Leading up to World War II he had tried out for the BBC and was rejected because he kept time by taping his foot. From 1935 to 1940 he made 78s for the Beltona label. This was at a time when a gramophones were a luxury item in the few homes that you found them in. Most of his recordings with Beltona were solo albums, although he did experiment with working small bands. During World War II, Shand was rejected for service due to a digestive problem. Instead he served during the war in the Fire Service. In 1945, Shand made his first broadcast on the BBC with his show "Jimmy Shand and the Band." He made numerous shows and appearances for both television and radio with the BBC. After World War II, Shand became a full time musician. He took on a lifestyle adopted by most rock bands. He traveled from Dundee to Iverness in the Scottish Highlands one night, then the next he was in London for a show and back to Dundee to sleep. Shand semi-retired in 1972, playing out of the way venues for a reduced fee. In the course of his career he had more than 330 compositions. He recorded more tracks than the Beatles and Elvis Presley combined. Since the 1950's the crowd has left Dunfermline Athletic Football Club to the sound of Shand's "The Bluebell Polka." Sir Jimmy Shand passed away on December 23rd, 2000. Shand was a member of Lodge Robert De Bruce No. 304, Ladybank, Fife, Scotland.